And for the rest of the comments, here's a little perspective.
Before the show began, I took a picture to show just how close to the stage our seats were: 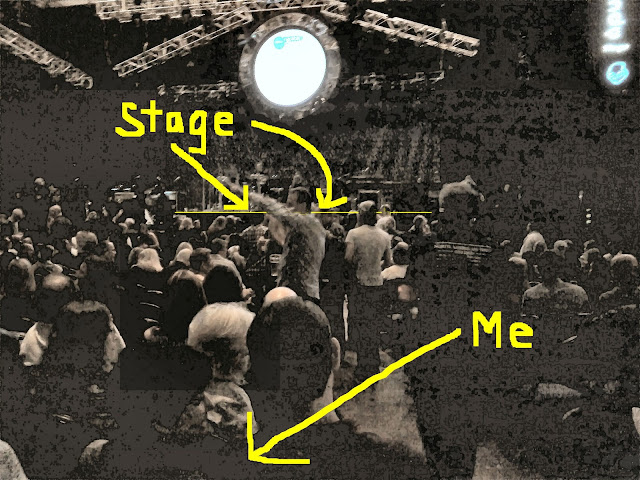 It's not very far, right?
And so, here are the rest of my notes:

However, there were a few moments when I saw Pete wail, going at it with his particular genius on guitar, and that I was in the presence of  it was something very special. The sound was great, there were times when parts were done differently and even more interestingly than on the album (a shame that there’s no download of it?) and the performance was excellent. I just couldn’t see it L.
You see... This wasn’t “just a concert” to me. It was more like a spiritual pilgrimage:

Imagine there’s a place – a city – your soul burns to visit, only it’s very, very far away and not even open to the public. It’s walled up and nobody can go there. You think about it and yearn for years, never believing you’d actually have the chance to go there. Then the city unlocks its gates and allows visitors – only it’s for just a short period of time. They may never unlock those gates again. And even if they do, you may not have the chance to go. So you do ALL you can to go right then, right now. Your soul is in disbelief that you can actually do this. But you put together all your resources and make it happen. It’s a struggle, and challenges arise along the way. But this is so important to your soul, you want to give it the best shot you can.

You finally arrive at the city’s gates. You’ve arranged for the best transport available to you. But as you reach the gates, they partially close. You cannot see above them. You can barely see the city itself. You try to go toward the gate, to breathe the air of this place, to feel the atmosphere and experience being there. But you are shoved aside. Others much larger than you take precedence, and you – despite your equal resources, and despite the way this place, this city, touches you and thoughts of it alone have been life-changing for you – despite all that, you are not permitted to see the city, breathe its air or feel its terrain. Despite others’ full view, and despite your supposed equality to them, you are only permitted to view a glimpse through cracks in the fence, while they are able to experience it fully.

The word is: “Them’s the breaks.”
But I have a right to feel disappointed.

Now... Lest you think I was simply a miserable ass during this concert – that wasn’t the case, I just honestly found the difficulties to be so pervasive that unfortunately they pretty much overwhelmed the experience, despite my trying earnestly to push them aside..

So, here also were some of the memorable “Good Parts:”
Songs performed after Quadrophenia were (not necessarily in this order):
…and, they surprised me by not ending with Tea & Theatre.

And now I'm having tea, after the theater, just me.

LD on CD - and Her Garden of Oddity
I'm a writer/songwriter/composer who has encountered many life obstacles and is determined to finally produce her CD, and to voice random thoughts while on that path.